Andrette Lo Conte is an Italian Film Producer. She graduated in Psychology in Turin (Italy) with the thesis: 'A contemporary application of Stanislavskij's Acting Method'. In 2016, she's got a Master degree from the Royal Holloway University of London in TV and Cinema Production with a thesis about Psychological Horror Movies.

In 2013, she founded her own production company Freak Factory Srl in Rome and runs it as CEO. It was funded twice by the Italian Ministry of Culture thanks to the cultural relevance of its projects. Movies produced by Freak Factory have won numerous awards and have been selected by the most important international film festivals.

The most successful short movies produced by Freak Factory were both directed by Aldo Iuliano: Fulgenzio, a comedy, and Penalty, a drama about migration. 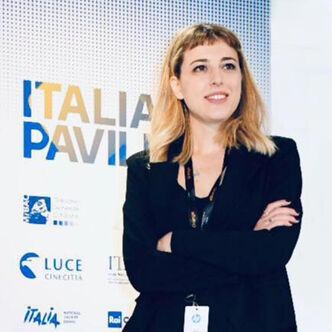 In 2018 she produced the short film Anna directed by Federica D’Ignoti with Valentina Lodovini and Pietro De Silva, cinematography by Daniele Ciprì and editing by Claudio Di Mauro. Shortlisted at Nastri d’Argento 2019 and in Official Selection at Taormina Film Festival 2019.

The same year, Freak Factory produced the feature film La Partita, coproduced by the American company Wrong Way Pictures. Directed by Francesco Carnesecchi with the participation of nationally renowned actors such as Francesco Pannofino, Giorgio Colangeli, Lidia Vitale and Alberto Di Stasio. In the Official Selection at Taormina Film Festival 2019. On September 1, 2020 it was included in the Netflix catalog and released worldwide as Original Netflix movie.

Between 2020 and 2021 Andrette produced the feature film Space Monkeys directed by Aldo Iuliano in co-production with Rai Cinema. Souad Arsane, a French actress Revelation César 2019, is the main protagonist of the film, in the technical cast of the movie there are established professionals of the Italian and international scene such as: Daniele Ciprì - cinematography, Marco Spoletini - editing, Francesca Sartori - costume design, Paki Meduri - set design, Daniela Altieri - hair design, Giuseppe Tripodi - sound. The film is currently in post-production.

Andrette worked also as Production Manager for others production companies in Europe. She currently works on the developing of new projects.

In 2017 Andrette produced the short film Penalty in co-production with Rai Cinema, with the contribution of Mibact and Sprar. It was the most awarded Italian short film around the world in 2017. It won over 50 International awards, fifth at Nastri d'Argento 2017 and Globo d'Oro 2017. It was also selected by four Academy Awards festivals (Nashville, Athens, Gjion and Odense) and it won the Young Independent Authors section at the 74th edition of the Venice International Film Festival. Penalty was eligible by the Academy for the 2018 Oscar awards in the Best Live Action Short Film section.